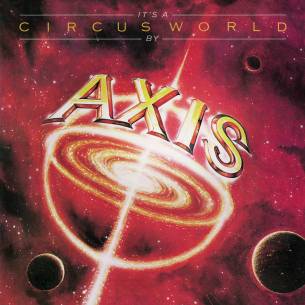 “IT WAS SOMETIME in the late seventies that the Axis record started appearing in discount bins around the world. Up until then it seemed to have been a well kept secret, despite the fact that it was issued on the RCA label (via a production deal with their management’s Hologram imprint) and featured two former members of the high profile American band Derringer. Once aficionados started to hear and appreciate the record it soon became apparent that this was one of the most exciting releases of the entire era. As a classic power trio, based in Los Angeles, featuring guitarist Danny Johnson (formerly of Derringer and Steppenwolf), bassist Jay Davis and hard hitting drummer Vinny Appice (from Derringer), Axis stood out head and shoulders above other contenders. Produced by British wünderkind Andy Johns, and recorded in the Record Plant NYC, the album packs an enormous punch, conjuring up comparisons to other seasoned 70s acts such Montrose, Mountain and, natch, Derringer. It is, it has to be said, a mystery as to why they flew beneath the radar, failing to make any commercial impact whatsoever. If you are a fan of late seventies tough, lean and mean hard rock then there is much to appreciate here; with tracks such as ‘Brown Eyes’, ‘Juggler’ and the twisted ‘Busted Love’. In fact there is not one weak cut on the record, which in itself is a tremendous achievement. It was a fact not lost on Tony Iommi, who played the record to Ronnie James Dio before recruiting Vinny Appice to join the rejuvenated Black Sabbath.”